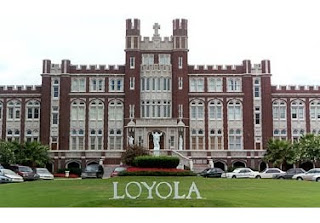 Loyola University New Orleans was ranked No. 6 among master’s universities in the South in the U.S. News & World Report 2010 edition of “America’s Best Colleges,” which hit newsstands Thursday, Aug. 20.

“America’s Best Colleges” includes rankings of 1,400 colleges nationwide, which are grouped into categories created by the Carnegie Foundation for the Advancement of Teaching. This is the 19th year Loyola has ranked in the “Top 10 Southern Region Schools.”

Loyola was also ranked second place on the report’s “Great Schools, Great Prices” list of southern master’s colleges. The magazine cited the stellar quality of Loyola’s academic programs, combined with the comparatively low cost of attendance for students who receive need-based financial aid. According to the description of the rankings, the magazine works “on the premise that the most significant values are among colleges that are above average academically.”

The great news comes as no surprise to Loyola President Kevin Wm. Wildes, S.J., Wildes said Loyola’s continued presence in the rankings is a testament to the quality and commitment of students, faculty and staff.