During the war between England and France, and while Canada was in possession of the latter power, the Indians were often instigated by them to fall on the frontier settlements of the British colonies. In these proceedings, the French governor of Canada was much assisted by the Roman Catholic missionaries, who had attained a great ascendancy over the Indians. 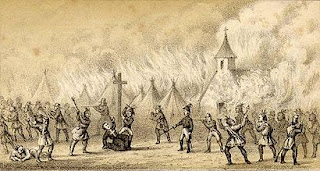 One of the most celebrated of these missionaries was Father Sebastian Ralle, a French Jesuit, who spent thirty-seven years among the Indian tribes, in the interior parts of America, and learned most of their languages. He was a man of learning and address; and by a gentle, condescending deportment, and a compliance with the Indian modes and customs, he obtained a complete ascendancy over the natives; and used his influence to promote the interests of the French among them.

" He even made the offices of devotion serve as incentives to their ferocity, and kept a flag, on which was depicted a cross, surrounded by bows and arrows, which he used to hoist on a pole at the door of his church, when he gave them absolution, previous to their engaging in any warlike enterprise."

A dictionary of the Norridgewock language was found among Ralle's papers, composed by himself, and was deposited in the library of Harvard College.

The English settlers, having for a number of years suffered from the depredations of the Indians in those parts, in the year 1722 sent Col. Westbrook, with 230 men, to 'seize Ralle, who was regarded as the principal instigator; but he escaped into the woods, and they merely brought off his strong box of papers. The Indians, to revenge this attempt to carry off their spiritual father, committed various acts of hostility, and at length destroyed the town of Berwick. This last act determined the government to issue a declaration of war, and send an expedition against Norridgewock, and intrust the execution of it to Captains Moulton and Harman.

These officers, each at the head of one hundred men, invested ind surprised that village, killed the obnoxious Jesuit, with about eighty of his Indians,

recovered three captives, destroyed the chapel, brought away the plate and furniture of the altar, and a devotional flag, as trophies of their victory.