Guarani Baroque And The Jesuits Of Argentina 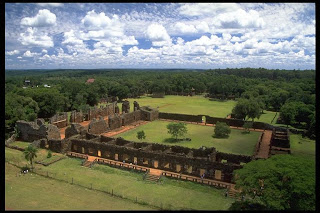 Jesuit ruins in San Ignacio Miní (Misiones, Argentina)
San Ignacio Miní was one of the many missions founded in 1632 by the Jesuits in the Americas during the Spanish colonial period. In terms of preservation, including the architectural and sculptural details that typify the style known as "Guaraní baroque", San Ignacio Miní may be the most outstanding surviving example of the 30 missions built by the Jesuits in a territory that now comprises parts of Argentina, Brazil and Paraguay. It is a tourist favorite for its accessibility, surrounded by the present-day village of San Ignacio in the province of Misiones, Argentina.

Rediscovered in 1897, San Ignacio gained some notoriety after poet Leopoldo Lugones led an expedition to the area in 1903, but restoration work had to wait until the 1940s.

Parts of the ruins are still precarious, supported by sore-thumb scaffolding that obscures the essential harmony of the complex but does not affect individual features. Side entrance to the church. Side entrance to the church. San Ignacio's centerpiece was Italian architect Juan Brasanelli's monumental church, 74m long x 24m wide, with red sandstone walls two meters wide and ceramic-tile floors. Overlooking the settlement's plaza, decorated by Guaraní artisans, it is arguably the finest remaining structure of its kind. The adjacent compound included a kitchen, dining room, classrooms, and workshops.

The priests' quarters and the cemetery were also here, while more than 200 Guaraní residences, whose numbers reached 4,000 at the mission's zenith in 1733, surrounded the plaza.

The complex of the ruins currently holds the Museo Jesuítico de San Ignacio Miní museum. Since 1984 it has been listed as a World Heritage Site by UNESCO.
Posted by Joseph Fromm at 1:00 AM

Your text is lifted almost word for word from my Moon Handbooks Argentina guide. Please remove, or you could face legal action.