Sarah Palin And Some Jesuit Perspectives On Abortion 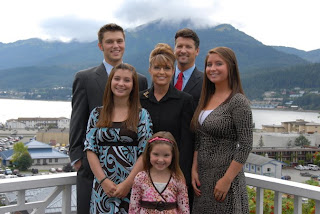 Former Governor Sarah Palin lambasted abortion advocacy groups like Planned Parenthood and NARAL who give women the message that they can't juggle both a baby and a career or education.

“It is so bogus that society is sending a message right now and has been for probably the last 40 years that a woman isn't strong enough or smart enough to be able to pursue an education, a career and her rights and still let her baby live,"

This is a quote from Fr. James Martin, S.J. during a televised round table that included EWTN's Raymond Arroyo during the heated speech at Notre Dame by President Obama.

"abortion is a fundamental situation in the Catholic Church, and I think it’s very important, and I’m pro-life. The question is, you know, disagreeing on tactics, and

I don’t think that the sort of extreme pro-life movement is really a good way to enter into dialogue, which is what we need. I don’t understand how the Catholic Church can dialogue with our political leaders if they adopt these extreme tactics.

So -- so my only concern, you know, in those situations is that it marginalizes the Catholic Church -- it makes us look like a fundamentalist sect with whom it’s more and more difficult to talk. And with that, we lose any sense of common ground or any sense of voice in the public square."


Dr. William Blazek, a Jesuit scholastic and physician, is a board certified specialist in Internal Medicine and a Research Scholar in the Center for Clinical Bioethics at Georgetown University School of Medicine. He teaches ethics and clinical skills as an Adjunct Assistant Professor while preparing for ordination to priesthood in the Roman Catholic Church.

This is a portion of his editorial entitled, A Jesuit's Perspective on Abortion.

"As a practicing physician licensed to care for pregnant women, I believe that abortions kill a living human being in the earliest stages of development.

The moral question at hand is not if we are killing; it is whether the victims have any claims as persons or not. While the U.S. legal balance is at present skewed towards the denial of rights for the unborn, Catholics and many Evangelical Christians argue that both the mother and the unborn have rights.

On a spiritual level, a woman seeking an abortion should recognize that exercising her “choice” will kill a vulnerable and defenseless human being. There is no doubt about this. There is also no doubt that an action can be legal and at the same time be wrong."

Link (here) to the full piece in the Washington Post.

Fr. John F. Kavanaugh, S.J., is a professor of philosophy at St. Louis University in St. Louis, Mo. Father wrote this in an open letter to then Senator Obama, it was published in America prior to the 2008 presidential election.

"Perhaps your seeming ambivalence is related to your position on late-term abortions and partial-birth abortions. Second- and third-trimester abortions comprise a small percentage of all abortions, but they are horrific. Anybody who thinks not, does not think."

This is an excerpt from an interesting interview and debate between Fr. Robert Drinan, S.J. and the Rev. Jerry Falwell, it is from a larger article published by First Things magazine, entitled Robert Drinan, Infanticide and the "Unthinkable".

"The Supreme Court said that there's a constitutional right in a couple, or in a woman, to have an abortion. Can the federal government say that we are going to restrict and constrict that particular right? . . .

I have not repudiated the position of my own church. I've said thousands of times that abortion is immoral in my judgment and coming out of my tradition, but that this is oversimplified piety,

as if everything that the churches hold must in fact be put into American law. . . . A lot of Catholics in the Congress and throughout the country feel that the state should not deny Medicaid funds to people who are entitled to an abortion under the law. . . "
Link (here) to the full article in First Things.
Posted by Joseph Fromm at 1:01 AM

It is the likes of Drinan and Martin who have led us to the morass of immorality and moral relativism that so pervades the Catholic church today.

You can call Palin stupid, but unlike most Jesuits today, she knows right from wrong. Hmmm.
Maria

'it makes us look like a fundamentalist sect with whom it’s more and more difficult to talk. And with that, we lose any sense of common ground or any sense of voice in the public square. So that’s my only fear for those kinds of things'.

It's the world sinking into deeper evil that is making it harder for us to dialogue, not the Catholic Church becoming a fundamentalist sect. Good grief Father Martin will be 'warning' us that we may have to be martyred for our beliefs if we continue in this fundamental vein. Can you imagine such a thing? People being killed because they object to, er er oh yes, little defenseless people being killed! Then we will hear some non-silent screams!
God grant me the courage of my beliefs.

Desperate times call for desperate measures, Fr. Martin, and it is extremely important that our witness be much more visible now than it was in the past. Hence, the need and usefulness of what you call "a radical" pro-life movement.

I think its is important that all Jesuits find Sarah Palin on their side when it comes to "life". In the scheme of things, is not life more important than tax policy? Or whether you have a D or an R on your voter registration card?

Just swap out the word "abortion" and replace it with "slavery" and listen to how bizarre some of these Jesuits sound.

The Society of Jesus started to sink when, in the XVIIth century France, the Jesuits became so proud with their "casuistique". Blaise Pascal was right in his attack. It led, little by little to the suppression of the Society of Jesus in the XVIII th century and it opened the door to the terrible and bloody French Revolution.
Today, the Society of Jesus, through the voice of so many Jesuits, is committing an even more serious sin because of the relativism about the sacredness of life. The subtile and refined distinction beetween "Pro choice" and "Pro abortion" is the new "casuistique". It will have the same deadly consequences. May all my Jesuit brothers wake up and stand for life, radically.

Thank you for this article, really useful material.