The Riddle of Fr. Hackett 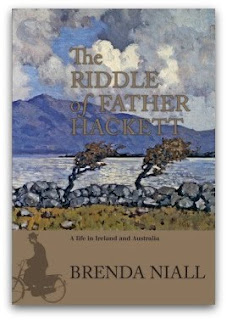 Brenda Niall, one of Australia’s best biographers, has written a highly readable and surprising life of William Hackett (1878–1954), the Jesuit priest who was pressured out of Ireland to Australia in 1922 for his involvement with republican armed forces during the Civil War…entitled The Riddle of Father Hackett.

William Hackett was the fourth of nine children of a well-to-do doctor and his wife in Kilkenny, who sent several sons to Jesuit schools. He joined the Jesuits, adopted a generally austere and ascetical lifestyle, studied in Ireland, France and Holland, taught in Limerick and Kildare, and from 1915 on gave his energies to being a publicist for the republic.

Then, most exceptionally among Jesuits, he supported the anti-Treaty side in the Civil War. By way of background Niall shows that Willie’s father had, at some cost, taken Parnell’s side against the hierarchy around 1890.

Hackett supported the Irish army of national liberation in a number of ways. One of his activities discussed in this book is his attempt to stir consciences in England, for example, by taking Quaker visitors to sites of Black and Tan atrocities.

This book contributes to the ongoing clarification of the bewildering events of 1916–23 in Ireland and their Australian connections. For instance, Niall sheds new light on key figures in the early 20th-century campaign for Irish independence such as Erskine Childers. Hackett was a personal friend of Childers, sharing with him clandestine activities in defiance of the British government; and, later during the Civil War, of the Irish Free State and the Catholic bishops. ..

At the height of Hackett’s republican involvements, the Jesuit provincial offered him at the age of 44, it seems, a choice of silence or appointment to Australia: he chose Australia.

Link (here) to the rest of the story from the ACTS: Jesuit Vocations in the Northwest Blog