False Gods And Relativism At The University Of Detroit Mercy 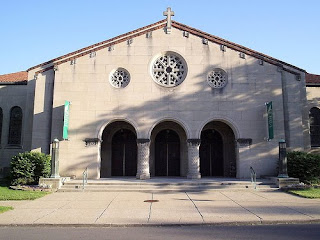 A UDM student reportedly stole four medallions depicting various world religions in an attempt to deny their recognition in the Sept. 24 Celebrate Spirit service, the university's opening liturgy.
The student, who has not been publicly identified, entered Gesu Church between 7 and 9 a.m.,

according to the UDM Department of Public Safety.

The suspect stole the medallions representing Islam, Confucianism, Buddhism and Hinduism and disposed of them, officials said.

The medallions have not been recovered.

Sr. Angela Hibbard, IHM, was the first to notice the medallions were missing. Hibbard served as the liturgy coordinator for Celebrate Spirit, and arrived at church around 9:30 a.m. to prepare for the celebration.

She noticed the difference in the banners almost immediately. They were not resting against a table as she had left them the night before, she said. Instead, they were on top of the table, and were missing their medallions.

"The banners were placed very neatly," she said. It "almost looked respectful."

Upon closer inspection, she noticed that the medallions representing Christianity and Judaism were still in place, which raised a red flag in her mind.

She recalled that a student had previously objected to the other medallions and had threatened to protest what he believed was religious relativism and the worshiping of false gods.

Hibbard contacted Public Safety, which began a search for the student. The student was found before the 11:30 a.m. service began and was brought in for questioning.

"It's a sad thing that happened, and it illustrates how one person's inability to accept others can affect a whole community," said the Rev. Gary Wright, S.J., of Campus Ministry.

Despite the attempt to stop the inclusion of the other religions, Wright believes that Celebrate Spirit's message of unity was not lost.

"It made us all pause and then realize that because of this we had the ability to bring the community even closer," he said.

Hibbard agreed, saying that once the mass started she forgot all about what had happened, and had a good time.

"This (person) did not stop what was happening," she said. "It was the best (mass) yet with the most coherent theme in everything we did."

Students unaware of the theft also viewed the mass as a success.

"I thought it was one of the best that I've seen," said Adam Mayhew, a fifth-year senior. "I wouldn't have even guessed that anything was wrong."

Hibbard and Wright both said that it is important to put anger aside and look to what will be best for the university, which may mean expelling the student involved.

The student "needs to accept the consequences of (his) actions," Hibbard said.

No criminal charges have been filed yet, but the student could potentially be charged with a hate crime, officials said.

Photo is of Gesu Roman Catholic Church was built in 1937, more than a decade after Gesu School. Both were part of development around the University of Detroit that began in the middle 1920s. The church was designed by architect George Diehl in the Spanish Mission style.
Posted by Joseph Fromm at 12:58 AM

Labels: Jesuits and the Law, University of Detroit Mercy

I'm as ecumenical as the next guy but I have to ask; why is a Catholic, Jesuit school carrying banners from other religions -- at the Mass of the Holy Spirit?

I think we can respect other faiths without incorporating them into the Holy Sacrifice of the Mass, can't we?

Or perhaps a Catholic jealous for the sanctity of the Mass?

How sad that the nun turned the Catholic student over to security. And how sad that he could be hit with a "hate crime" charge for removing some worthless (and idolatrous) medallions from Sister's banners.

Surely, the guy is totally just.