On The Subject Of Angels 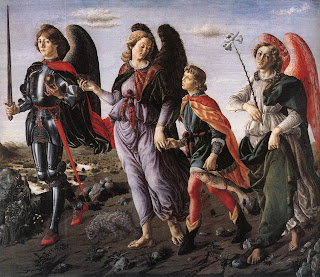 Aaron Pidel, S.J. at Who so ever Desires has recently written on Angels, his post is entitled, The Angels as a Political Problem, here is an excerpt.

The Feast of the Archangels always

makes me—and others, I suspect—acutely aware of the divide between contemporary and ancient religious sensibilities. Angels—once as present in Christendom’s social imaginary as microbes in our own—no longer loom large. Perhaps mothers still say the “Angel of God” prayer with their children before bed (as my own mother did with me), but such devotions usually do not outlive Santa Claus and the Tooth Fairy.

St. Ignatius of Loyola in his Spiritual Exercises takes the opportunity to highlight the importance of Angels and the fallen Angels in his Discernment of Spirits. Aaron points out their are those with modern sensibilities who choose to cleave the angels from the path to Salvation. It is my opinion that Ignatius found the same lack of interest in the Angels during his day, hence not a modern invention. Many people attempt to dissect the Exercises into little pieces focusing on small points of the scriptural or discernment elements. Ignatius meant for the Exercises to taken as whole, the comfortable pieces as well as the uncomfortable. Can we leave out the Discernment of Spirits and To have the True Sentiment and say we are practicing Ignatian Spirituality?

Painting is the three Archangels with Tobias (here)
Posted by Joseph Fromm at 1:01 AM