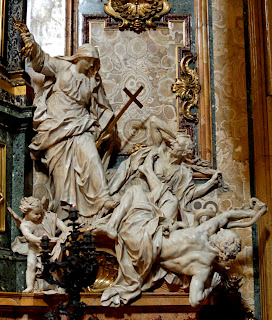 The tomb of St. Ignatius Loyola is situated at a brilliant side altar in the Society of Jesus's Mother church in Rome, the Church of the Gesu. One of the most striking features of the tomb of St. Ignatius is the sculpture to the right of the altar entitled "Religion Overthrowing Heresy and Hatred" by the Baroque master Pierre Le Gros "the Younger" (1666-1719). Indeed it is a memorable and striking work, the intricacies of which tell the story of a triumphant Church and a religious order of men that was dedicated to ensuring such triumph. G.K. Chesterton once commented, "Baroque was regarded as a bombshell; especially as it was spread by the Jesuits, who were credited with consistent readiness to throw a bomb." Some of the Jesuits of my acquaintance were indeed bomb-throwers but not of the baroque variety.
Link (here) to Renew America  and read the full article by John M. DeJak entitled "Bomb Throwing Jesuits"
Posted by Joseph Fromm at 1:01 AM

The tomb of St Ignatius of Loyola and the symbolism of its imagery presents not only the greatest challenge but the worst embarrassment to latter-day Jesuitism. It was once emblematic of the character and work of the Society. No longer.

What is more, it is impossible for Jesuits to celebrate Mass at this altar as those who run the Gesu no longer permit it. Instead they are referred to the altar in the sacristy or to the anodynely restored room of St Ignatius in the neighbouring house. Despite the presence of St Ignatius's body the altar is now seen solely as a supreme example of Baroque art. As a place of devotion it hardly figures.

"What is more, it is impossible for Jesuits to celebrate Mass at this altar as those who run the Gesu no longer permit it"--

I had to re-read this several times. Anyone who thinks that the Enemy does have a stanglehold on the Priesthood just isn't paying attention...