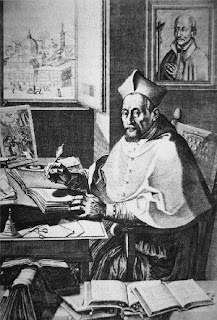 The Jesuit "Doctor of the Church" St. Robert Bellarmine’s most influential writings were the series of lectures published under the title

Disputationes de controversiis Christianae fidei adversus huius temporis haereticos“Lectures Concerning the Controversies of the Christian Faith Against the Heretics of This Time”). They contained a lucid and uncompromising statement of Roman Catholic doctrine. (1586–93;

He took part in the preparation of the Clementine edition (1591–92) of the Vulgate. His catechism of 1597 greatly influenced later works. In 1610 he published De Potestate Summi Pontificis in Rebus Temporalibus (“Concerning the Power of the Supreme Pontiff in Temporal Matters”), a reply to William Barclay of Aberdeen’s De Potestate Papae (1609; “Concerning the Power of the Pope”), which denied all temporal power to the pope. Bellarmine produced Dottrina Cristiani Breve (Brief Christian Doctrine) Rome, 1597), a small catechism for children, and Dichiarazione piX Copiosa della Dottrina Cristiani (A more copious declaration of the Christian doctrine) (Rome, 1598), a catechism for teachers. Approved by Pope Clement XIII, both catechisms became very popular and were translated into many languages. Their popularity lasted well into the twentieth century. Bellarmine’s autobiography first appeared in 1675. A complete edition of his works was published in 12 volumes (1870–74).

Labels: Jesuit Cardinal, Jesuit Saint, Jesuits and the Holy Father, Jesuits and Theology, You Won't Find This At America

I've been looking all over the place to find Disputationes translated into English.

Do you know where I can find/buy it?

It seems it has never been translated into English, which sounds like a huge loss for us.

Do you know of anyone interested in doing such a translation? Maybe a graduate degree project or something would take up the offer?

Those two are the only ones I can find Nick. The first comment is for the book but it is in an England library, I think Cambridge. The other comment is a link I found at St. Louis University's library for the Saint's book but it is just selections in it in English...all I could find!