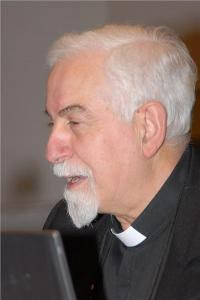 Before he was Pope, Cardinal Joseph Ratzinger would hold an annual summer retreat for his former theology students that focused each year on a single theme of acute concern. Three months after his rise to the papacy, Benedict XVI continued the tradition with a closed-door encounter in the Vatican's breezy summer residence, Castel Gandolfo. The topic chosen that first year with him as Pope was Islam, and the keynote speaker was Father Samir Khalil Samir, a soft-spoken, Cairo-born Jesuit and an expert on Muslim history and theology.

Thirteen months later, Benedict set off the most explosive moment of his papacy with a lecture at his old university in Regensburg, Germany, about faith and reason and the risk that Islamic theology makes the religion particularly prone to violence. Even as criticism of the speech spread in both Muslim and Catholic circles, Samir was among the first and most steadfast defenders of the Pope's message about Islam. Indeed, they were the same ideas Samir had been espousing for years. (See pictures from Pope Benedict XVI's first year.)

A new book has just been released by Ignatius Press (the longtime U.S. publisher of Ratzinger's work) that lays out in fine detail the Jesuit's vision of Islam's ancient tenets and current tendencies. Called 111 Questions on Islam, it is the translation of a book-length interview two Italian journalists conducted with Samir in 2002 in the wake of the 9/11 attacks. The priest says that in reviewing the material before the English-language release, he was struck by how little there was to update. "The major points that I laid out are the same today, after more than six years," Samir told TIME in a telephone interview. "This means the problems that we face with Islam continue to be more or less the same."

Samir says that beyond resolving the political conflicts in the Muslim world, there is much hard intellectual work that needs to be done to combat violence and expand freedom within the religion's ranks. "Islam is living a moment of great intellectual weakness. There is a crisis of thought," he says. "Certain things must be cleared up, ambiguities must be removed to arrive at a reading of the Koran in light of the contemporary culture based on human rights." (Read about the Pope's relationship with Islam.)

Samir sees as one of the great challenges facing Islam a lack of official leadership to certify or dismiss interpretations of what sacred texts say, notably on the question of violence. "There is a need for an authority, unanimously acknowledged by Muslims, that could say 'From now on, only this verse is valid.' But this does not — and probably will never — happen," he writes in response to Question No. 26. "This means that when some fanatics kill children, women and men in the name of pure and authentic Islam, or in the name of the Koran or of the Muslim tradition, nobody can tell them, 'You are not true and authentic Muslims.' All they can say is: 'Your reading of Islam is not ours.' And this is the ambiguity of Islam, from its beginning to the present day: violence is a part of it, although it is also possible to choose tolerance; tolerance is a part of it, but it is also possible to choose violence."

But what about violence, past and present, in other religions? Samir distinguishes Islam-inspired violence from the Crusades, for example, which he says were carried out in the name of Christianity (or for interests of a Christian-led nation) but not driven by any interpretation of the Gospel.

Father Dan Madigan, another Jesuit expert on Islam, doesn't deny that it's easier to justify a choice for violence with the Koran than with the Christian Gospel. But Madigan says attempts by Catholics to "claim the moral high ground" fall flat. "The idea that [Christians] can dismiss Muslims as inherently more violent doesn't stand up to historical scrutiny, whatever the justifications we might have given for our wars and our massacres." Even more to the point, says Madigan, a Georgetown University professor of theology with a Ph.D. in Islamic religion, it is counterproductive for Christian leaders and scholars to lump together all Muslim interpretations as being somehow interchangeable. "Representing some Muslims' choices for peace and tolerance as simply one of the possible Islamic alternatives is not helpful. We cut the ground from under them if we tell them the leg they are standing on is pretty shaky. We need to support those who are looking for a new way forward in a pluralist world rather than undercutting their opinions."

In the 2½ years since Benedict's charged lecture, the Vatican has established a permanent, ongoing Catholic-Muslim dialogue group, which held its first meetings in November. But last Easter, the Pope performed a high-profile baptism in St. Peter's Basilica of Egyptian-born Italian journalist Magdi Allam, who converted from Islam. Many Muslims and Catholics took this as a provocation. Samir instead praised it as a "necessary gesture." He says, "Freedom to choose your religion is more important than all the initiatives put together. Without it, dialogue is not possible."

Labels: Jesuits and the Holy Father

For my full opinion on this article from Time please copy this URL: