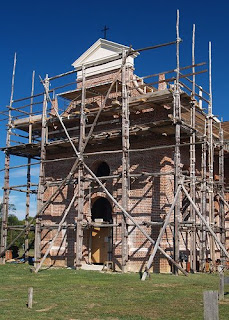 As research director for Historic St. Mary's City, he was expected to guide the reconstruction of the first Roman Catholic house of worship in English America, for which no drawings or even written descriptions have ever been found.

All that was left of the 1667 Brick Chapel in Maryland's first Colonial capital were its huge, 3-foot-thick brick foundation and thousands of fragments of glass, lead, brick and plaster sifted from the soil during 20 years of painstaking archaeology.

But after some dogged research - and six seasons of construction using 17th-century techniques - the Brick Chapel has reappeared on its original foundation, rising out of the field like a revelation.

Twenty-five feet tall, with an elaborate, classically inspired brick facade plastered to imitate stone, it is modeled after 17th-century Jesuit chapels from Rome to Macao.

Even Miller, who has spent decades uncovering the lives of Maryland's first settlers, recognizes that the chapel may seem impossibly grand for a town clinging to the edge of a vast wilderness.

"It was a bit intellectually jarring, I agree ... inspired by a completely different cultural sensibility," he said as he guided visitors through the nearly completed chapel. "It's not very big, but in terms of the quality of the materials, it's so far above what people were living in in early Maryland. It is truly an amazing statement."

But the design "fits in what the Jesuits were doing in the rest of the world," including many places as remote as 17th-century Maryland.

The original chapel was ordered closed in 1704 by the Protestant governor of Maryland, demolished by the Jesuits and salvaged for bricks some years later. The $3 million reconstruction was paid for with donations from individuals, foundations and civic and religious groups. It will open next year as part of Historic St. Mary's City, the original capital site.

While the Archdioceses of Baltimore and Washington were important contributors, the chapel will not be consecrated for worship. But it will stand as a monument to the principle of religious tolerance that the Calvert family - the Roman Catholic proprietors of the colony - pioneered in the Chesapeake outpost in response to the harsh repression of Catholics in England.

"To me ... the chapel is a physical representation of Maryland's experiment with religious freedom," said Timothy Riordan, chief archaeologist at Historic St. Mary's City.

Established in 1634, St. Mary's City was the fourth English settlement in North America and the first in Maryland. It once had as many as 100 homes, taverns and other structures, and it remained Maryland's capital until 1695, when the seat of government was moved to Protestant Annapolis. The old town was soon abandoned and vanished into the soil.

Jesuit priests among the first settlers acquired property they called "the Chapel Land" and soon built a wooden house of worship. That chapel burned in a 1645 Protestant rebellion against Lord Baltimore. It wasn't until the 1660s, after the restoration of a king in England, that the Jesuits set about replacing the chapel with a sturdier structure.

But no drawings or descriptions have ever been found, only fleeting references in Maryland records to glass windows broken by a vandal, payments for lifting flooring stones for a burial, and a governor's mention of a "good brick chappell."

"It's a mystery why this structure ... wasn't described by more people," Miller said. "It was a building that stood out. It wasn't part of the typical plantation environment of early Maryland or Virginia."

When systematic archaeology in Chapel Field began in 1988, it was quickly apparent that this had been a very large structure. The surviving brick foundation was 3 feet thick and 5 feet deep, implying a structure 23 to 25 feet tall, according to Riordan's research.

The chapel was shaped like a Latin cross, 54 feet long and 57 feet across the arms. The masons used an "English bond" pattern of bricklaying - alternating rows exposing headers (the ends of the bricks) and stretchers (the long sides). Chemical analyses confirmed that the bricks were fired from local clay and set in oyster-shell mortar - all copied in the reconstruction led by mason Jimmy Price, owner of Virginia Limeworks.

Excavations quickly revealed human burials, at least 500 in all, beneath the chapel floor and in the churchyard. Three costly lead coffins are believed to hold the remains of Calvert family members. (They are currently on display at the Smithsonian's American Museum of Natural History.)

Fragments of brick window frames (or "mullions"), diamond-shaped window glass and lead strips spoke of leaded glass windows set in brick plastered to look like stone. Clusters of this debris suggested where the windows were located. Shards of imported stone and the burial patterns hinted at the size and placement of the flooring stones.

Other debris told Miller and his crews that the church was roofed in overlapping flat brick plates. The plaster bits and nails they found scattered about suggested a gray-white plastered interior and a wooden ceiling.

But the details of the chapel's original appearance remained elusive. Would persecuted Catholics have built it to resemble Anglican churches in Virginia and England?

Perhaps not, Miller said. "We know that the people likely involved with it were educated in Europe." For example, the Rev. Henry Warren, the Jesuits' Maryland provincial, worked and studied in Rome.

For guidance, Miller and Riordan turned to John I. Mesick and M. Jeffrey Baker, restoration architects in Albany, N.Y., and Thomas Lucas, a specialist in Jesuit architectural history at the University of San Francisco.
"The good news is [that] the Jesuits in the 17th century were very organized, almost in a military manner," Miller said. All over the world, their chapels "had a lot of similarities." They followed classical precedents, used mathematically derived proportions, emphasized tall interior spaces for visual impact and ensured abundant natural light.

The result, now standing in the St. Mary's Chapel Field, is a tall chapel of handmade red brick, with a cream-colored Baroque "Tuscan" facade decorated with classical features, including pilasters, entablature and a round central window.

A niche for a saint's statue is empty. "We thought that might have been a red flag in front of a Puritan bull," Miller said.

The plastered interior has a barrel-vault ceiling of pine planks and a floor paved with a gray sandstone from Ohio. Clear, leaded-glass windows and wooden doors are being made.

An additional $150,000 worth of interior finishing work - including the altar and replicas of the tabernacle and, perhaps, artwork - await additional donations.

Would Philip Calvert recognize the place if he returned? Miller has thought about that.

"The nightmare is him laughing his head off," Miller said. "The best scenario is him saying, 'Yeah, that's pretty good.'"

Link (here) to the original story and watch video and interview regarding St. Mary's
Posted by Joseph Fromm at 1:00 AM

I am very excited about the news in this post! Two summers ago I discovered the half-finished chapel at St. Mary's city and it's great to hear that the project is complete.

Thanks for all your stories about Jesuits in American History

I lead a group that visited St. Mary's City and the chapel this week. The exciting news is that the chapel may be consecrated in the near future! Keep this in your prayers!!