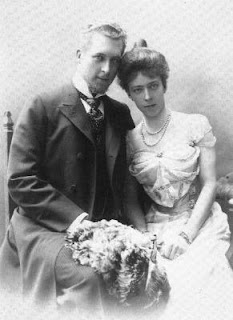 In 1925, to celebrate their Silver Wedding, King Albert I and Queen Elisabeth of Belgium traveled to India. There is a touching account, by a Belgian missionary priest, Father Jacquemotte, of his meeting with the King at the Jesuit College in Darjeeling. The priest had formerly been a soldier in World War I. The story is related in the lovely book, Le Roi Albert et les Missions, (1935), by Joseph Masson, S.J. Albert and Elisabeth were always staunch supporters of the Catholic missionaries; this account reveals the King's deep admiration for their heroism.
"Under my missionary's cassock," the Father writes, "my soldier's heart beats faster than ever. Just as before, on the Yser, I am standing before my commander-in-chief, who is cordially shaking my hand..."
"You were in the artillery?"
"Yes, Sire, at Ramscapelle, one day... in September 1918, you came to shake our hands in our shelter ... since that day, I had never seen you again."
In silence, they gaze at each other, they understand... Ramscapelle!
"Then, you entered the air force, as a pilot?"
"Yes, Sire... and then, after that, I turned out badly... I became a Jesuit."
The King laughed heartily. "Continue, continue: the cause you are defending is so beautiful."
"Sire, there are, I believe, only two sacred causes: God and Country."
"But your life must be very hard. How do you endure the climate! I have seen, in the plain, old missionaries, in India for fifty years...What courage... it is admirable!.. Is the distance from home not too painful?"
"Sire, it is a sacrifice. So you can imagine our joy at seeing you again. We would never have hoped for it..."
"You are not returning to Belgium?"
"No, Sire, never."
At this brief response, which revealed the gift of self, the King remained thoughtful for a moment: then, he concluded, forcefully:
"Courage, courage, you are still a soldier!"

Link (here) to the blog titled The Cross of Laeken

Wedding photo King Albert I and Queen Elisabeth of Belgium
Posted by Joseph Fromm at 1:00 AM