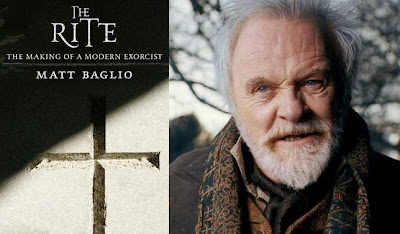 In "The Rite," Anthony Hopkins portrays an exorcist - an unorthodox Jesuit named Father Lucas stationed in Rome. The priesthood is a long way from the 73-year-old Oscar-winning actor's own beginnings.

Born in a small working-class town in Wales, his father, a baker, was a confirmed atheist. "He was a disciple of Bernard Shaw, the Fabian Society, Marxism and all the rest of it," says Hopkins. "So I was told by my father when I was a little boy that religion is a load of rubbish. He didn't mean any harm by it, but that's what he believed. His philosophy was it's a dog-eat-dog world, and he's probably right." But Hopkins himself isn't so sure.

He finds God and the nature of evil fascinating questions, and talking with the actor requires you to be on your game. A self-described "dummy" as a child and failure at school, today he is obviously well-read, a musician, composer and painter. To prepare for the role of Father Lucas, based on a real-life exorcist still practicing, Hopkins consulted with a priest, the Rev. Gary Thomas, who is a trained exorcist. "He believes the devil is incarnate, is in an anthropomorphic form," explains Hopkins, whose character at one point becomes possessed, allowing him a chance to give us one of those chilling screen moments for which he is so well known.
Link (here) to the full story at LA.com
Posted by Joseph Fromm at 1:00 AM

I saw The Exorcist. I found myself disappointed as I watched it -- it compares so poorly to the actual experience of real evil.

I think we tend to forget that evil has essentially the same powers that God possesses.

There were no threats that were then carried out against innocents. (The myriad threats themselves, carried out over time and distance, defy any understanding of physical reality and time sequences.) There was no torture to family, friends, and random strangers. There was no progression from lower level demons to more powerful demons -- a progression that meant that continuous prayer would no longer work at some point: pain and fatigue becoming constant. There was no treating the pious as "toys" to prove their power and control over religions. There was no extensive modification of the physical world to execute threats and tortures.

And I'm not describing the worst aspects. There are things that cannot be described.

But perhaps most importantly, there is no understanding of evil in the "possession" movies. It is almost as though a person is being described by their shadow -- as opposed to the whole person.