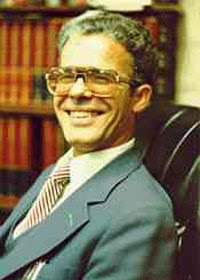 Aside from Jack Chick’s own name, the name most familiar to readers of Chick comics is that of Alberto Rivera (1935–1997). He is mentioned in numerous tracts and serves as the central character in six issues of Chick’s The Crusaders full-size comic book. Chick even devotes space to him in the handful of books the house publishes.
Alberto Magno Romero Rivera was born in 1937 in the Canary Islands. He claimed to have been a priest who served as an undercover operative of the Jesuit order to infiltrate and destroy Protestant churches and institutions. He maintained that he was so successful that he secretly was made a bishop. Yet he turned his life over to Christ and became a Fundamentalist evangelist. He claimed to have rescued his sister—a nun—after she nearly died in a convent in London.

In the 1970s he met Jack Chick, who publicized his story with much fanfare. It added immense

amounts of detail (and implausibility) to Chick’s global Catholic conspiracy theory. The Alberto series included some of the wildest claims found in Chick’s publications—that the Vatican started Islam, Communism, the Masons, and the Klan; that it controls the Illuminati, the Mafia, and the New Age movement; that it created the Jehovah’s Witnesses, Mormonism, and is databasing the name of every Protestant church member for a future inquisition.

The Alberto series started a controversy that resulted in Chick being unable to sell the comic books in many Protestant bookstores. Following a complaint from the Catholic League for Religious and Civil Rights, the Christian Booksellers Association began considering whether to expel Chick. Soon afterward, Chick withdrew from the CBA.

The protest against the Chick Alberto series was waged by both Catholics and Evangelicals. Many Catholics, naturally, protested the lurid and inaccurate depiction of their faith, and many Protestant bookstore owners who saw their point removed the series from their stores.

In response, Chick published My Name? . . . In the Vatican? in which he repeated many of Rivera’s sensationalistic claims and gave grudging acknowledgment to the ability of Catholics to get his works taken out of Evangelical bookstores.

I have spoken with Mr. Rivera on the telephone once. I think I told him I read those tracts.

There are no good jesuits, a good jesuit isn't a jesuit, look at the jesuit oath and you'll understand, google/youtube > jesuit oath