The Angel Of The Blessed Sacrament, 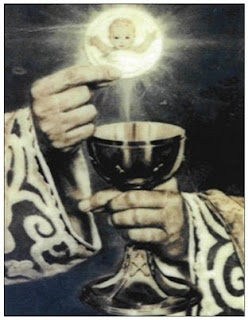 Venerable Aloysius La Nuza, the Apostle of Sicily,
called for his innocence and devotion, the Angel of the Blessed Sacrament, was born in the year 1591, the same year in which St. Aloysius Gonzaga died, whom he resembled in virginal purity, love for the Blessed Virgin, and penitential life.

He preached throughout Sicily and the adjacent parts, and the concourse of people to hear him in the open air sometimes amounted to twenty-five thousand.

He wrought many miracles, and died at Palermo in 1654, with the same words in his mouth which were on the lips of St. Aloysius at his death — " Lsetantes ibimus." His soul was seen to enter heaven accompanied by St. Ignatius, St. Francis Xavier, and others of the Society, and an innumerable multitude of souls which by his means had been saved.