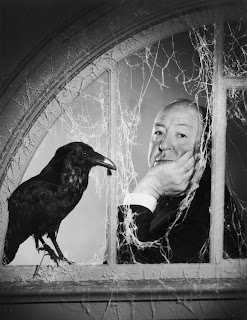 The Jesuit film expert, Father Dermot Preston, argues that this nuanced view of the human condition is highly Catholic: "In a Hitchcock film, personalities are always cast as various shades on the middle part of the spectrum, avoiding the plastercast saint and the personification of evil: clean-cut (video link) James Stewart in Rear Window (1954) starts out as a rather uncommitted and morally neutral observer of life and learns in a hard way that he cannot be so.”

"In a secular world, his characters are very Catholic," agrees Father Richard Blake SJ, author of Afterimage: The Indelible Catholic Imagination of Six American Filmmakers. “They actively pursue their own “salvation” in trying circumstances. They get into a pickle and depend on themselves to get out of it. There is no Protestant “by faith alone” at work here. When most threatened, the character is alone; salvation is assured when he works his way back into a community, for instance in Rear Window or North By Northwest (1959)."

Born into a devoutly Roman Catholic family in the East End of London in 1899, (excellent link) Alfred Hitchcock was the nephew of a priest, and according to McGilligan, continued to go to Mass for most of his adult life. He would invite priest friends onto film sets, gave money to Catholic causes and even donated a vineyard to a community of Californian priests.

"For Hitchcock Catholicism was something he was born with, as others might be born with red hair. It did not phase him" claims John Russell Taylor, Hitchcock's first and only authorised biographer (Hitch: the Life and Times of Alfred Hitchcock, 1978). "He was certainly esctatic when his daughter Pat married a nephew of the Catholic archbishop of Boston. I don't know how devout he was, but he certainly remained a Catholic."

Interviewed in 1973 for the magazine of his Jesuit alma mater St Ignatius College, Hitchcock shied from defining his faith explaining:

"A claim to be religious rests entirely on your own conscience, whether you believe or not. A Catholic attitude was indoctrinated into me. After all I was born a Catholic. I went to a Catholic School and I now have a conscience with lots of trials over belief,"

he said. Claiming his Jesuit schooling had developed his "reasoning powers" but also "a sense of fear",

Hitchcock would relate a celebrated incident where he had to choose the exact time for a beating, according to the Jesuit system where the master who ordered a punishment was not allowed to personally inflict it.

This incident, Hitchcock alleged was "in a minor way" like going through a form of execution
Link (here)
Posted by Joseph Fromm at 1:00 AM