Fr. Paul Carrier, S.J. Near The End Of The Line 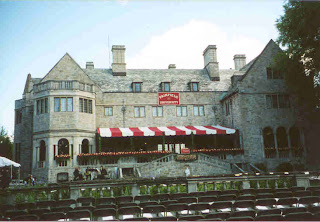 After two weeks of silence, Jesuit officials disclosed they have been in contact with the U.S. Attorney's office regarding the whereabouts of the Rev. Paul Carrier, a former Fairfield University chaplain and chairman of a fund that collected millions for a program that assisted disadvantaged Haitian boys.

In prepared release, the Society of Jesus, New England Province of Jesuits, said Carrier, a Jesuit who once served as the Fairfield U. director of campus ministry and community service, "currently has no assignment and is not performing any public ministry."

While not identified by name,

Carrier is referred to in the federal indictment two weeks ago accusing Douglas Perlitz, 39, a Fairfield University graduate and 2002 commencement speaker, of sexually abusing nine homeless Haitian boys in a program he established in 1997 to help them. The indictment makes reference to Carrier as "a religious leader who had met and befriended Perlitz while Perlitz attended college [Fairfield University] in Connecticut and who frequently communicated with and visited Perlitz in Haiti."

"The Society has been in direct contact with the U.S. Attorney's office and has informed that office of Father Carrier's whereabouts," reads an e-mail sent to the Connecticut Post by Kelly Lynch, a spokesman for the Jesuits. "The Society is cooperating fully with law enforcement in the investigation."

However, an individual who attended a Sunday afternoon discussion session regarding Perlitz, Carrier and the scandal that has enveloped the Haitian charity, said it was mentioned by at least two different attendees that Carrier is living in a home in Fairfield County. A Connecticut Post reporter was not allowed to attend the session.

"I wonder if he knew kids were sleeping in Perlitz' bedroom," Kendrick asked.

Kendrick said he has been stymied in attempting to get answers from the Society of Jesus.

"Why do they play these games?" asked Kendrick, who now lives in Maine and is a co-founder of that state's chapter of Voice of the Faithful, an advocacy group for people who have been sexually abused by clergy.

"As soon as I started asking questions I got a call from a law firm."

Kendrick urged the Jesuits to disclose "the specific reasons for Carrier's removal from public ministry."

He said church protocol "calls for a priest to be removed from all public ministry in the aftermath of an internal investigation of credible allegations of child abuse."

But the indictment does not charge Carrier with any crime.

Kendrick pointed out that Carrier taught at the Convent of Sacred Heart School in Greenwich in recent years.

He cited the Network of Sacred Heart Schools' website where an undated article notes that four students planned to accompany teachers and "the Rev. Paul Carrier, S.J., a member of our theology department, who is also chair of the Haiti Fund, Inc." to volunteer at Perlitz's project.

Kathleen S. Failla, a former Stamford Advocate reporter who now is director of public relations and communications for the Convent of Sacred Heart School in Greenwich, said Carrier was never employed by the school. When asked if he ever taught there, she referred the question to the Society of Jesus.

When the question was posed Thursday afternoon to the Society, Lynch, the spokesman, responded in an e-mail to the Post: "In light of the open investigation by law enforcement, the Society is not making any further comment at this time."

"Why can't they just tell the truth?" Kendrick said.

The Haitian program, called Project Pierre Toussaint, was started by Perlitz in 1997 as a street clinic with a grant that he received from the Order of Malta, a Roman Catholic charity. The program grew into a school, residential housing and even a two-level home where Perlitz resided. Fairfield University students, faculty and alumni contributed millions to a charity called the Haiti Fund, which Carrier, as chairman and Perlitz, as vice president, oversaw.

Perlitz was arrested in Colorado on Sept. 16 by agents from the U.S. Immigration and Custom Enforcement Service. He was scheduled to be flown back to Connecticut on Thursday to face charges in the indictment.

Assistant U.S. Attorney Krishna Patel presented evidence to the federal grand jury that between 2002 and 2008 nearly $2 million was transferred from the Haiti Fund's account to another controlled by Perlitz in Haiti.

Richard Markert, a lawyer representing the Haiti Fund, said money in the fund has evaporated and the project closed this summer.

Additionally, the grand jury heard that when allegations of long-term sexual abuse by Perlitz surfaced in Haiti in 2007, Perlitz allegedly used his relationship with Carrier and other Haiti Fund board members to conceal the abuse. The grand jury also listened to evidence regarding a letter being sent to donors stating the accusations against Perlitz were groundless.

The indictment claims the grand jury was told investigators hired by the Haiti Fund's board of directors were barred from entering Perlitz' room in his Haitian home, known as Bel Air, where the alleged assaults occurred.

The indictment also charges that an unnamed person flew to Haiti, removed two computers and others items from a safe in Perlitz' room and returned those items to the defendant in Connecticut.

Perlitz, whose work in Haiti led Fairfield University to name him the 2002 commencement speaker and bestow an honorary degree on him, faces seven charges of traveling overseas to engage in illicit sexual conduct and three counts of engaging in illegal sexual conduct with minors in a foreign land.

Each of the charges carries a maximum 30-year federal prison term and $250,000 fine. He is expected to plead not guilty to the charges, but faces detention without bond until his trial at the Wyatt Detention Center in Central Falls, R.I.

"The charges against Mr. Perlitz are extremely troubling and the Society of Jesus echoes the sentiments expressed by others that the judicial process move forward appropriately and with the full cooperation of all involved," the Society's statement reads.

The U.S. Attorney's office and U.S. Immigration and Customs Enforcement ask that anyone with information about the case, contact them at 203-773-2029

Link (here) to the full article in the Connecticut Post

Photo is of the "Bellermine Lawn" at Fairfield University