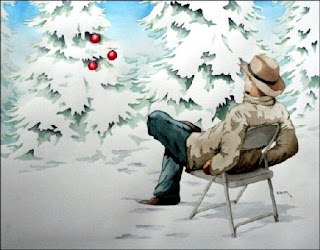 I'll be on blogger vacation until January 9th. Thank you all, over 1,200,000 visitors from all over the world who have come to visit this blog. This has been my Advent meditation for many years John 3:16 (For God So loved the World) , John 6 (Bread of Life Discourse) and John 17 (Prayer of the High Priest) in sequence. If you are looking for more Iganciophile stuff, please check out my side bar, I have linked well over 400 hundred Jesuit blogs, websites, books and essays. See you January 9th!


Some of my favorite Jesuit blogs
The City and the World
Offer It Up
The Journey of a Bishop
Whosoever Desires
Fr. Brian Van Hove, S.J. Blog
Posted by Joseph Fromm at 1:00 AM 20 comments:

A Jesuit On The Creche


For some married couples, a special aura surrounds their first Christmas. That was true for James and Emilia Govan.Together, they purchased their first crèche in 1962. Then, after a few years, they bought a second one. When several more years passed and they acquired a third, they wondered, Jim Govan says, what they were going to do with three Nativities.Although the Govans didn't know it at the time, that question, which led to their decision to collect Nativity scenes, planted the seed for the exhibition now on display at Loyola University Museum of Art in Chicago."Art of the Crèche: The James and Emilia Govan Collection" grew out of what Jim and Emilia shared: the Roman Catholic faith, an attraction to art and -- rooted in their Lithuanian and Italian immigrant backgrounds -- an interest in different cultures.The couple's collection grew slowly at first, Govan recalls during a recent interview by telephone. But in the early '80s, when they had about 20 Nativities and Jim had started reading up on the crèche's history, he and Emilia decided they wanted to document their budding collection. They wanted to learn as much as they could about the lives of the artists and artisans who made them, as well as the materials they used and how the crèches were made. Today, Govan continues to build the collection, in memory of his wife, who died in 2000. He has more than 450, all stored at his home, and has displayed them in churches and other venues -- including the Pope John Paul II Cultural Center in Washington, from 2001 through 2005.The first crèche they bought, however, never leaves Govan's Arlington, Va., home. "It represents in so many ways," he says, "the life I had with my wife. The bond and joy we had together."Although people tend to seek out traditional crèches, Govan's collection, by choice, includes many that are indigenous. The diverse cultures they represent and the sometimes unusual materials they are made of -- including potato clay and cinnamon paste -- draw people in, though. Curiosity about their own ethnic backgrounds leads many to ask, as one person recently did, "Do you have one from Slovakia?" Or Korea? an adopted child wanted to know. He does, he told them, stored in his home.Making the story theirs It's easy for a LUMA visitor to see the collection's enormous appeal. Like the stained-glass windows and Mystery Plays that predate them, crèches tell the story of faith, the

The Jesuit priest, an assistant professor of theology and English at Loyola University, gave a talk on the history of the crèche at LUMA on Nov. 27. When the first missionaries were sent out from Europe, "one of the first things they brought with them was the story of the Nativity," Bosco says. Jesuit records show, he adds, that the people they met -- whether from Japan, India, South America, wherever -- "were carving Mary, Joseph and Jesus with the cultural and human characteristics of their own people." Early Christians focused on the cross -- the Crucifixion -- because they saw celebrations of births "as a pagan, a Roman thing," he says. But when the Emperor Constantine issued an edict legalizing Christianity, and after his mother, St. Helena, brought back to Rome from the Holy Land a relic of Jesus' manger, Christians began to focus their attention on His Nativity. Nativities were displayed in the great cathedrals. Then, over time, they became "domesticated," Bosco says, moving into people's homes.

The movement to greater inclusiveness also was occurring in Europe in the 16th century. The Duchess of Amalfi ordered a crèche made in Naples that included 167 figurines, Bosco says. There was the butcher, the baker, and all the other members of a village and the guilds active at that time. The unique Nativity scenes that reflect their makers' cultures communicate the universal need to feel "we belong," Bosco says. "I'm part of this family."