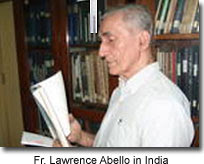 Addressing the American and Canadian Voters from Abroad
"Christians, in particular, must think of what Christ will say to them at the Last Judgement if they support "pro-choice" candidates"

What is the stand of the Presidential candidates? Barak Obama went to the extent of voting against the Bill prohibiting 'partial birth abortion'. As President he would reverse the present 'Mexico City Policy' prohibiting U.S. tax money from being diverted to promote abortion abroad. Reversing this policy would promote 'female feticide' by the hundreds of thousands in many Asian countries- an 'extremist feminists' Frankenstein' for those who want to uphold women's "rights" by supporting "legalized" abortion!

Obama is the typical, "pro-choice" relativistic atheist constructing his own truth. When Pastor Warren asked the two presidential candidates at what stage protection of human life must begin, John McCain answered 'at conception', whereas, Obama tried to confuse the issue by claiming that the question has both theological and scientific dimensions. He concluded that the answer is above his pay grade.

Later on, he admitted that he had given a flippant answer. For Obama the truth is not determined by reality but can be twisted and turned to suit his purposes in different situations. If Obama cannot answer from what stage human life must be protected, how can he be so adamant in pursuing policies that afford no protection to the preborn child!

Link (here) to the full article by Fr. Lawrence Abello, S.J
Posted by Joseph Fromm at 1:09 AM

I think Father Abello's line of thought has great significance for modern american society today. One must have some absolute faiths in which the preservation of human life in all of its forms must remain one of our ideals.