Fr. William Doyle, S.J. Chaplain Of The Battle of Ypres "They Speak His Name With Tears" 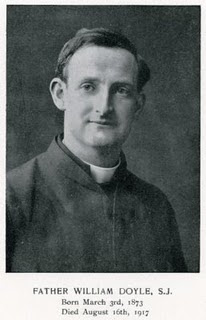 By Father William Joseph Doyle, S.J.
[The following letter, written by Father William Doyle a few days before he was killed during the advance of Irish troops north-east of Ypres on August 17th, 1917, is a chapter of autobiography needing the fewest possible notes in its elucidation. This Jesuit Chaplain of the Irish Province was the son of Mr. Hugh Doyle of Dalkey, co. Dublin, for many years Registrar of the Dublin Bankruptcy Court; he was forty-four years of age when he wrote this to his father, aged eighty-six.* Educated at Radcliffe by the Rosminians, William Doyle nevertheless became a Jesuit. He studied in Belgium, was ordained at Milltown Park in 1907, was Professor at Clongowes (where he founded and edited The Clongovmian) and subsequently laboured in Limerick and in Dublin. In November, 1915, the call to more strenuous service came to him, and three months later he went to the Front with the 16th Irish Division. For his bravery at Ginchy he was awarded the Military Cross, and he was afterwards commended by his Commanding Officer for the V.C., which, however, he was not to receive. As a preamble to his own letter may be quoted a line from that of a brother-chaplain, written about Father Doyle before his death : "He is a marvel. They may talk of heroes and saints—they are hardly in it!" That exclamation neither the saints nor heroes aforesaid, nor yet the eighth Urban of the scrupulous Decree, will in anywise take amiss.]

July 30th, 1917.—For the past week we have been moving steadily up to the Front. It was half-past one a.m. when our first halting-place was reached, and we marched again at three. It was the morning of July 31st,. the Feast of St. Ignatius, a day dear to every Jesuit, but doubly so to the soldier sons of the soldier Saint. Was it to be Mass or sleep ? Nature said " sleep," but grace won the day; and while the weary soldiers slumbered the Adorable Sacrifice was offered for them. As we fall into the line once more the dark clouds are lit up with red and golden flashes of light, the earth quivers with the simultaneous crash of thousands of guns—the Fourth Battle of Ypres has begun. . . . The road was a sight never to be forgotten. On one side marched our columns in close formation. On the other galloped by an endless line of ammunition waggons, extra guns hurrying up to the Front, and motor-lorries packed with stores of all kinds ; while between the two flowed back the stream of empties and ambulance after ambulance filled with wounded and dying. We marched on through the City of the Dead—Ypres, out again by the opposite gate. A welcome halt at last, with perhaps an hour or more of delay. At that moment the place for sleep did not matter two straws—a thorn-bush, the bed of a stream, anywhere would do to satisfy the longing for even a few moments of slumber after nearly two days and nights of marching without sleep. I picked out a soft spot on the ruins of a home, laid me down with a sigh of relief. 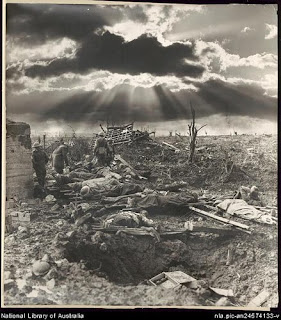 August 1st.—Morning brought a leaden sky, more rain, and no breakfast. Our cook, with the rations, had got lost during the night, so there was nothing for it but to tighten one's belt.
Sunday, August 12th —We have just got back to camp,, after (for me at least) six days and seven continuous nights on the battle-field. I shall give you the principal events of these exciting days, as I jotted them down in my notebook. (August $th.) All day I have been busy hearing the men's confessions, and giving batch after batch Holy Communion. My poor, brave boys—they are lying on the battle-field, some in a little grave dug and blessed by their chaplain, who loves them all as if they were his own children. Do you wonder that, in spite of the joy that fills my heart, many a time tears gather in my eyes as I think of those who are gone ? As the men stand lined up on parade I go from Company to Company giving a General Absolution, which I know is a big comfort to them. Then I shoulder my pack and make for the train which, this time, is to carry us part of our journey. "Top-end for Blighty, boys; bottom-end for Berlin !" I tell them as they clamber in, for they like a cheery word. "If you're in Jerryland, Father, we're with you too," shouted one big giant, and is greeted with a roar of approval.

As ever, dearest Father, your loving son,
Willie.
[Six days later, Father Doyle fell. Tributes were paid to his memory in the Press, sometimes in unaccustomed places. One such lingers in memory from the pages of The Morning Post: " The Orangemen will not forget a certain Catholic Chaplain who lies in a soldier's grave in that sinister plain beyond Ypres. He went forward and back over the battle-field with bullets whistling about him, seeking out the dying and kneeling in the mud beside them to give them absolution ; walking with Death with a smile on his face, watched by his men with a reverence and a kind of awe. His familiar figure was seen and welcomed by hundreds of Irishmen who lay in that bloody place. Each time he came back across the field he was begged to remain in comparative safety. Smilingly he shook his head, and went out again into the storm. He would not desert his boys in their agony. They remember him as a saint—they speak his name with tears."

Link (here) to read the original in the Dublin Review

The Second Photo is from the Australian Army of what the battlefield looked like around the time Father William Doyle served in the area.
Posted by Joseph Fromm at 12:30 AM

Many thanks for this and for your other posts on Fr Doyle. They are very informative.

I live a couple of miles from Dalkey in Ireland where Fr Doyle grew up. I am a great admirer of his and am trying to promote greater awareness of him, perhaps with a view towards creating some new interest in his cause.

To this end I have just started a blog a few days ago dedicated to Fr Doyle, his life and his writings. I will post daily thoughts from his writings and other commentary from time to time.

I have not finished setting out his basic biography and I intend to write an essay on his spirituality in the coming days. But the basic blog is there. Please come and visit, make a comment and perhaps send some of your readers along as well!!

Eh, rather stupidly, I forgot to inckude the url for the Fr Doyle blog!!

I love your blog: Remembering Fr. William Doyle SJ, but it was your posts on John Sullivan that really grabbed me. What a man of God.